Cine film is the past. And film only exists, if it is seen. My performance „The 8mm Project“ wants to bridge the gap between the very private image and the public one of its time.

I am fascinated of old cine films. I always was. As a kid of the 70s there was nothing more interesting than to play with the expensive technical toys of the grown ups.
There was so much to discover.

Old photo albums pose a certain fascination. And there are more treasures in the cupboards and closets of our parents and grand parents, that are still waiting to get discovered: Home movies! They were something very special at their hey days! Not only in price, also in using those cine films. The projectors were expensive, the handling complicated and in the end it was costly to transfer them to video – no wonder many families have forgotten about those movies.

A multimedia performance in the city of Steyr/Upper Austria.

This is the starting point of my 8mm-Project. A multimedia performance in the city of Steyr/Upper Austria. Historic documents, moving images of a local committed amateur filmmaker are the base material. It is complemented with popular movies of their time.
In the beginning I asked myself, what image of a family is more ‚real‘: the staged reality in popular movies or the staged reality in the home movies of an existing family?
To decide on that you have to see and recognize both. To compare them and to break the suggestive power of the images. 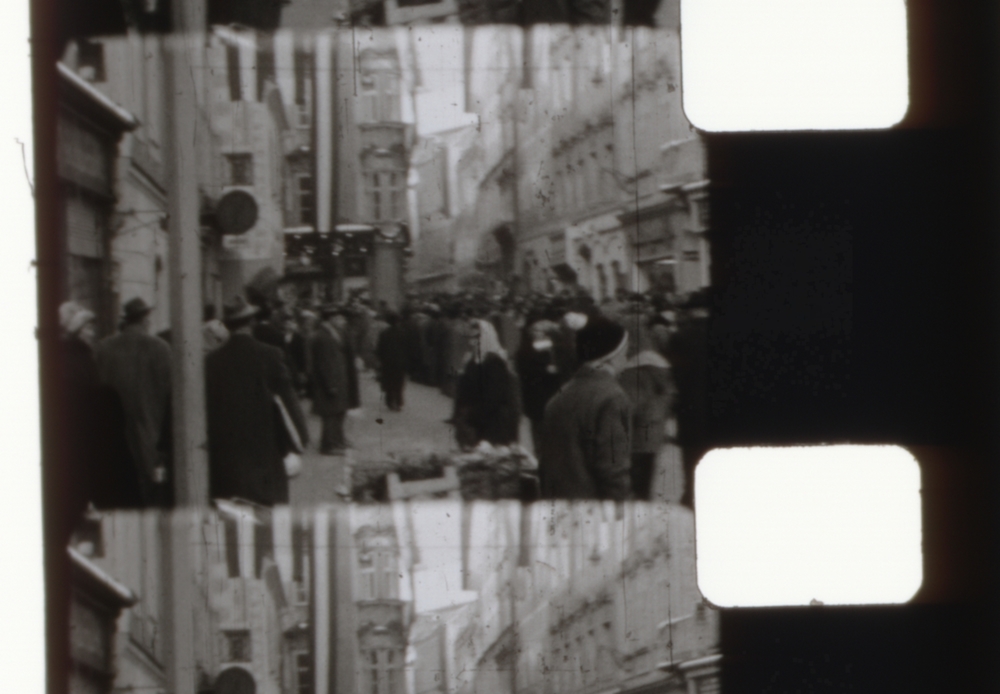 For the 8mm-Project/#steyr this family is the one of Sepp Mican, a passionate amateur filmmaker. He was only known with a camera in his hand to everyone surrounding him. He used to live in the former worker’s estate Eynsfeld in the city of Steyr/Upper Austria and started to document his family life in the early 1950s on with tons of home movies. Through his lens he saw the flood of 1959, he saw his children growing up and he pictured the holidays at the lakes or in the mountains of Austria. There was not much difference to the life depicted by famous actors in the local box office hits of his time. The economic necessities of the post-war period let the big desires shrink to the little private happiness – being it on the silver screen or in ‚real‘ life. The 8mm-Project/#steyr wants to explore that private shell.

Eventually there will be a multimedia performance in spring 2016 in the city of Steyr, one that follows the people and the location. Not chronological and not documental and surely not narrative in the conventional sense. On the path to this goal the 8mm-Project/#steyr will also be documenting my work and let the spectators join me at work in the archives on my search for more material.
And while aiming for more information there will be also a creative process going on. Paintings, objects and other small, interactive surprises will wait for my supporters. The production of these will be documented here, on my blog and in the news section of the crowdfunding site, in the following days and weeks.

For what do I need your support?

Silent movies have one disadvantage – they are silent. I am very happy to have convinced Brian Duffy, mastermind of the legendary Modified Toy Orchestra of my project. He will accompany the performance musically live. The support will be needed to cover his travel expenses. And of course converting hours and hours of Regular 8 and Super 8 cine film for digital projection is quite costly. Some of the old material is not in the condition to be projected anymore so it needs to be handled carefully.
Furthermore I will need some financial support for my research in the archives of Steyr as I want to find out about the happenings shown in the home movies.

What will you get in return?

A wide choice of rewards is waiting for you: Starting with a simple postcard to an unusual catalogue. Besides that I have started screen printing again. How about one good old fashioned gym-sack for this feeling from these past times.
And you are supporting a exciting project… this is quite something.